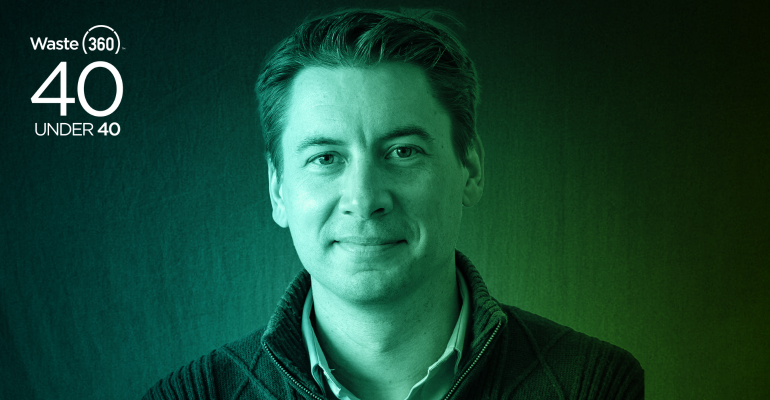 Recently receiving millions of dollars in grants from the US Department of Energy, the American Battery Technology Company (ABTC) has been strategically led to success by CEO Ryan Melsert. In this Q&A Waste360 spoke with Melsert about his approach to innovating and what it has been like driving ABTC to new heights.

Ryan Melsert, CEO, American Battery Technology Company(ABTC), has developed a game-changing approach to problem-solving that has allowed him to continuously drive the company one step closer to the end goal of true battery recycling.

Melsert continues to push the barriers of what is possible by not conforming, believing that in order to “solve the unsolvable” you must first look beyond what is known to begin exploring all of the possibilities.

In this Q&A, Waste360 spoke with Melsert about his approach to innovating and what it has been like driving ABTC to new heights.

Waste360: What does it mean to you to be an innovator?

Melsert: Yeah, I think especially in the battery materials field where we are right now, there are a large amount of mature legacy processes that exist, and the mining industry has traditionally grown at a much more incremental rate.

However, with the rapid growth and demand for electric vehicles in the past few years, it really needs to start growing at an exponential rate, and that requires much more than just copying and pasting existing facilities.

It’s going back to first principles to really put critical thought into these processing techniques and bringing these new technologies to market.

I think innovation is about challenging the status quo and really putting critical thought into deciding how things should actually work as opposed to just how they’ve worked in the past.

Waste360: Can you tell me about your process of taking an idea from concept to implementation?

Melsert: I think it always starts with identifying the challenges that you’re looking to address to see what the fundamental issues are that you’re trying to solve.

It’s important to look at how those problems have been attempted to be solved in the past, but at the same time, to not box yourself in and really try to avoid constraints that don’t exist; really only being constrained by physics-based issues.

Once you do that, a lot of times you see that a lot of the constraints people believe exist actually aren’t there.

Waste360: What kind of team is needed to make these innovations as efficient and sustainable as possible?

Melsert: I think the important thing about the team is encouraging an environment where you don’t just accept that the status quo is the best that can be done.

Again, it’s about setting the environment where the end goals are set, but then each of those potential constraints is able to be challenged, people are encouraged to really work from first principles, and it is acceptable to take risks.

You know if you take a risk and try a solution, even if it doesn’t work out in the end, it’s still better than playing it safe and sitting back and just copying what’s already been done in the past.

Waste360: Is there anyone who stands out to you as someone who really shaped the success of your career?

Melsert: Yes, there are a handful of individuals. There are people who really encourage you to be a self-starter, to take the initiative, to move forward, and really not be held back by different types of bureaucracy or perceived constraints.

I think the people who really enable you to move forward and give you the encouragement to take those risks are the ones who’ve been the best mentors in the past.

Waste360: Can you tell me about a project of yours that stands out as your favorite and why?

For many years, I worked designing battery manufacturing processes, and as I saw different types of waste and defects and end-of-life material be created, it was just always very surprising to me how little effort was being put into designing end-of-life systems.

Even outside of the company I was working at, it was very difficult to find anybody who really had a process of how to recover material out of life in a strategic fashion.

I think having the skill set of understanding fundamentally how to manufacture something gives you the best insight on how to demanufacture it.

So, kind of taking that reverse manufacturing approach deconstructing these end-of-life batteries in a very strategic fashion, and then recovering the elements and selling them directly back into the market in a closed-loop fashion is something that was missing in the market.

There was a large void there and we’re excited to now have designed the full integrative process and to be building and commissioning our first commercial facility.

Waste360: What is your number one goal with everything you create?

Melsert: For my whole career I’ve worked within the energy systems field; it’s a pretty broad field is including conventional energy systems, renewable systems and now much more into stationary storage and battery material processing, but there’s still a single thread that ties it all together.

I mean, I like to consider myself a classical thermodynamicist.

It all comes down to thermodynamics and energy systems that drive the fundamentals for all these different applications.

It’s great to be able to take that single skill set and apply it across so many fields.

Waste360: Is there anything else you are involved with that you think demonstrates the work you are doing within the industry?

Melsert: The U.S. government has an institute called the Critical Materials Institute (CMI), which is really meant to develop fundamental-based science of how to recover critical materials.

At the start of the year, I joined the board of the CMI and began trying to help take a lot of the technologies that are developed at the R&D level and work through scaling them up and getting them to market.

Mining tends to be painted with a broad brush – many people think that all mining techniques are environmentally damaging. This group really works to set rigorous standards of what is an environmentally responsible mining operation versus one that isn’t.

They’ve recently got involved also in the recycling side. So again, we joined that group, and I joined the working group helping to write the standards to essentially differentiate between what is a responsible process and what isn’t.

I think working with these types of third parties to essentially give these stamps of approval is important when communicating these projects to the public and when communicating them to potential customers so that they can really see the impact of what they’re buying in their own supply chains.

Waste360: How does it feel to be recognized and honored with both the 40 Under 40 and the Innovator award?

Melsert: It was humbling to be selected for both; to have the external validation and recognition that the systems we’re developing are meaningful for the broader market means a lot.

Recovering materials from end-of-life products is a very important part of what’s generally called the waste industry, and while many companies talk about it or do lab-scale experiments, you know the really important step is now building commercial-scale facilities and actually implementing these technologies.

We’re excited to be scaling these up and hopefully making the Waste360 community proud.

I think some of the recognition we got through waste 360 helped to get us along the way, and now as we get this recognition from the federal government and our corporate partners we’re excited to be accelerating our commercialization.

By Auto Futures, Lynn Walford. American Battery Technology Company (ABTC) is revving up funding, processes, testing and getting ready for the onslaught of electrification through de-manufacturing, clean mining and new technology. Ryan Melsert became CEO of ABTC at the end of August 2021, when he was promoted from Chief Technology Officer (CTO). Melsert explains how…

by Alexa St. John 10-5-22Published by Business Insider The auto industry’s desperate need for batteries to power millions of EVs has flipped the power dynamics for a host of battery startups.  Once car companies started making their more-than $515 billion electrification plans, they began scrambling to secure battery technology and supplies. And that’s where things have gotten…